WTF do all these acronyms mean?!

“HDMs, I need help! My DD who is EBF just destroyed one of her MCNs with the biggest pooplosion ever. My DH gagged and said it’s time for BLW. Eeek! Need help. TIA.”

Lost or did you follow that? These acronyms are not exclusive to HDM (that is, Hills District Mums for the uninitiated). They’re a secret code used on parenting forums around the world because, it seems, parents (particularly mums) are too time poor to type out whole words. Or maybe it’s the easier option when you’re doing everything one-handed while breast-feeding, tidying up or feeding a child!

At HDM HQ, we don’t love these acronyms and have often been left scratching our heads while we try to decipher a particularly left-field one! They’re not compulsory in the Hills District Mums Facebook group but are commonly used on posts, and if you’re not across at least some of them you’d be forgiven for thinking there’s an entirely new language being spoken (or typed!).

While a secret language can often make someone feel like they belong, these acronyms can be quite alienating for those that aren’t across the code!

So here it is – our guide to the most commonly used acronyms in the Hills District Mums Facebook group. 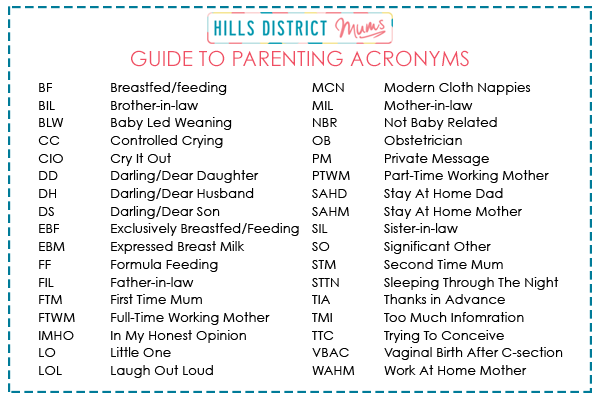 We will say though, we are quite fond of one suggested late last year when things got a little heated – CTFD!

Did we miss any? Are you a lover or a hater of the acronyms?