We’ve hand-picked the following parks that we think are pretty special. These are the parks that put the ‘great’ in ‘great day out’. They lift the bar considerably, so that when you return to your humble little suburban corner park, the kids feel slightly hard done by if the memory of this recently visited park is still fresh! We think they’re worthy of a day trip from the Hills with the kids but be warned, because they’re pretty epic they do get busy on weekends and in school holidays. 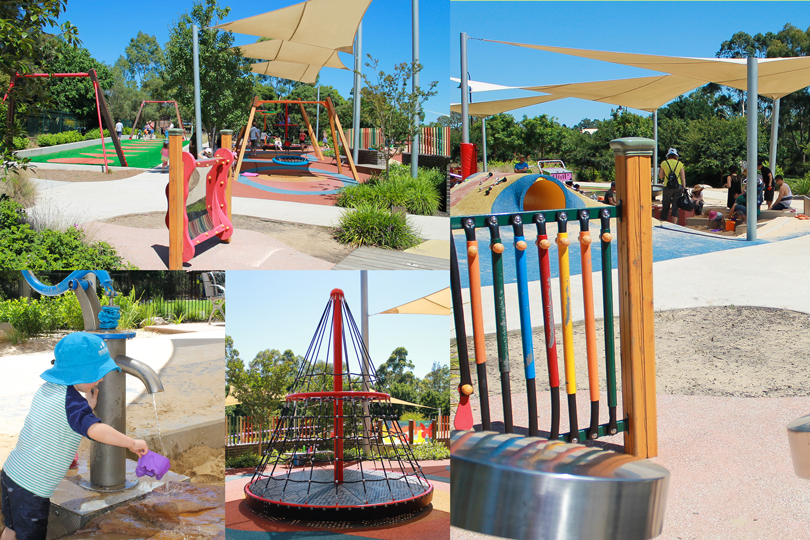 This playground is fab! The concept of the numerous Livvi’s Places in Sydney and around Australia is a really interesting one. In a nutshell, these inclusive play spaces provide a unique environment for children of all ages and all abilities to play side by side. You can read more at touchedbyolivia.com.au.

The playground at Yamble Reserve is stunning, with different pockets to discover and lots of brightly coloured elements to explore and ponder. There are stepping bells and bongos, a large sand area with a cool water pump, excellent long flying fox and a second one with a chair and harness, big spinning structures, little hills and tunnels and more.

Huge shade sails cover a large portion of the playground but not the flying fox. Some trees offer a bit of extra shade too but in the middle of the day it probably gets quite warm. It’s fully fenced with security gates and there’s plenty of seating. But this is the type of playground where, with toddlers particularly, you kind of have to wander around with them – but that’s really no hassle as it’s so much darn fun! Older kids would probably be ok to roam around a bit on their own with less supervision. 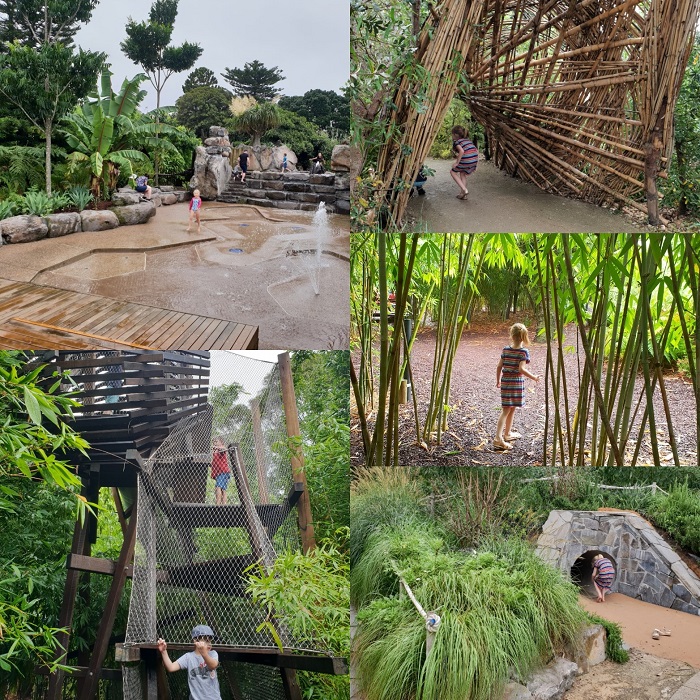 OK, so we know this one is definitely not in the Hills District. In fact, it’s a bit of a trek to Sydney’s eastern suburbs. But it IS pretty special and would make for a lovely family day trip on a weekend or a day in school holidays when you have lots of time.

The Ian Potter Children’s WILD PLAY Garden is located in Centennial Park Sydney. This park is a stunning park already but with this new space, it’s even more amazing! This $4 million nature play space only opened in late 2017 – the key term to note here is ‘play space’ not ‘playground’.There’s dry creek beds, a water play area, a bamboo forest, a giant slide, banksia tunnels, rope bridge, turtle mounds and a treehouse. Our kids loved it because it’s really different and we haven’t seen anything like it before. It could be worth taking a change of clothes given the water play and the fact that the kids will be running, climbing and crawling! You can read more about it here.

Centennial Park in general is stunning and there’s lots of other things to do in the larger park too! Take your bikes and scooters for a ride, visit the ponds with ducks, play at the other playground or book in for horseriding. Do some googling before you head to the park though as it’s massive, with various entrances so a bit of planning and knowing where you’re going would help. 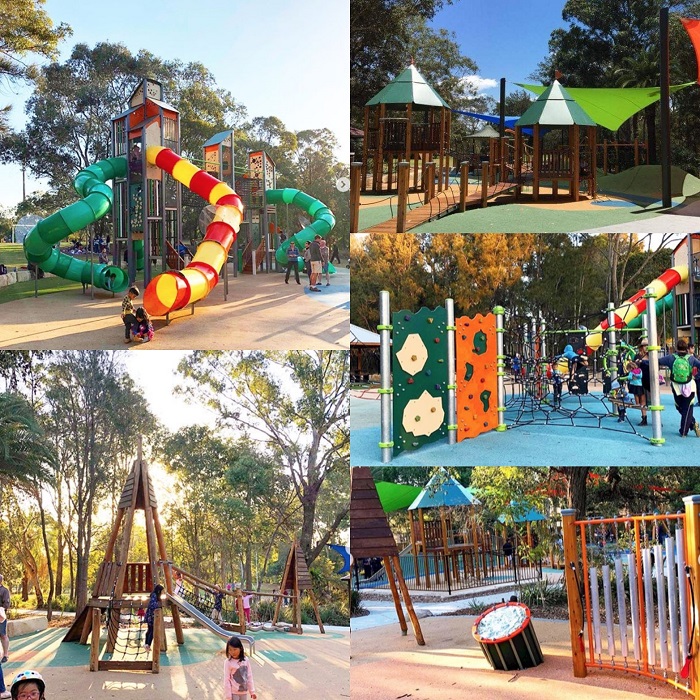 Photos care of our friends at Ryde District Mums.

This park is about 35 minutes from Castle Towers, so not TOO far. It underwent a major reno a couple of years ago and as a result it’s now huuuuge and has multiple play areas. It does get busy though, particuarly on weekends. It’s good to see some equipment that caters for older kids too like the epic flying foxes and the huge slides. It ticks lots of the major boxes like toilets, bbqs, shade (from a sail and the trees), awesome equipment and areas to do other things like kick a ball, run and ride/scoot. There’s an actual track with markings and road signs which is always a crowd-pleaser. If your toddler is into trains there’s also a train structure in the playground on the Chalmers Road side of the park. 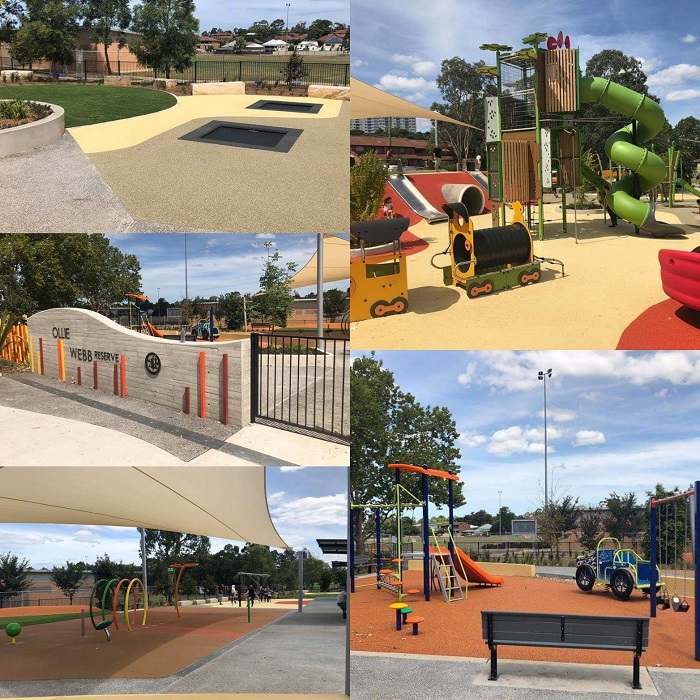 This fantastic park only opened in February 2019, so it’s quite new and shiny! It’s an all-abilities playground and was built in consultation with the Touched By Olivia Foundation. It’s a $1.8million park so as you’d expect it has STACKS of great equipment for different ages – slides, sand, water pumps, swings, trampolines, tunnels, rope nets and on and on. There are good amenities and shade sails over parts of the playground, with more to come. And…. it also has water play! 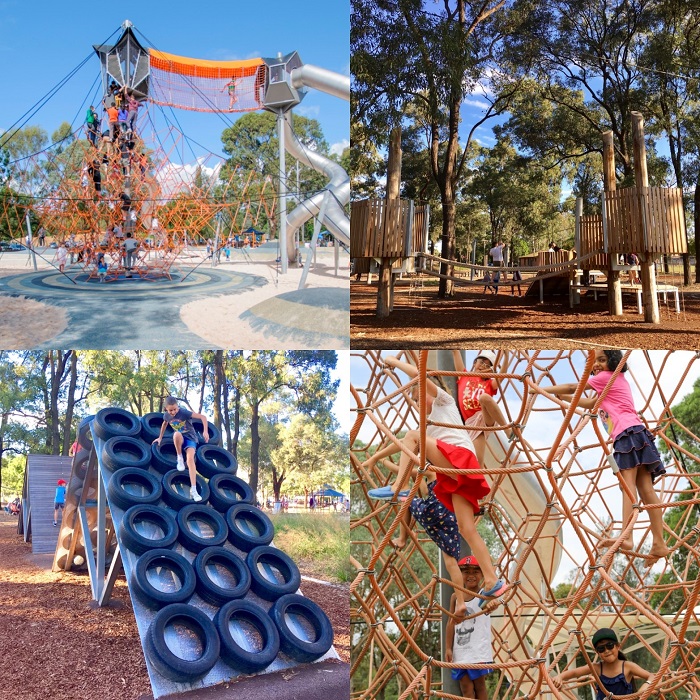 We sometimes find that tweens and teens are forgotten as far as parks go but Fairfield Adventure Park is specifically for them! There are major slides and a sky bridge, as well as challenging rope climbs, a 33m long double flying fox and a boot-camp style obstacle course. It’s only a few years old, covers a large area and offers all required amenities such as shelters, bbqs and loos. If you visit with little ones, keep an eye on them as it’s a large area and does get busy. It’s also opposite the leisure centre which has water play – another plus! It’s about 35 – 40 minutes from Castle Towers. 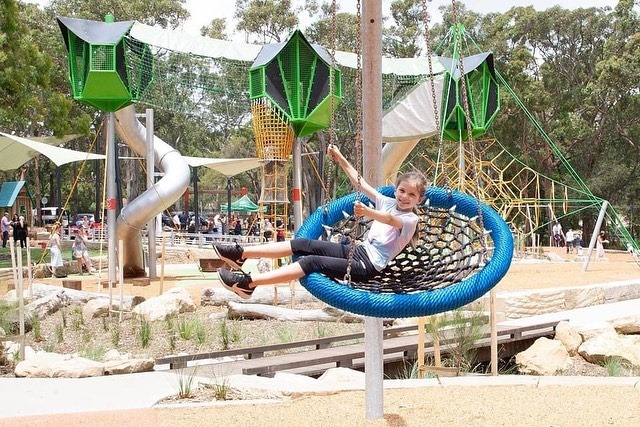 The new playground at St Ives Showground looks fabulous! The new playground has distinct areas for very young children through to those in their teens. There are windmills and timber animal sculptures to reflect the showground’s agricultural history and nature play areas have timber, rocks and other natural materials intermingled with plants. The idea behind these spaces is that children can explore beyond play equipment and use their imaginations in play with other children. And yes, there are toilets! 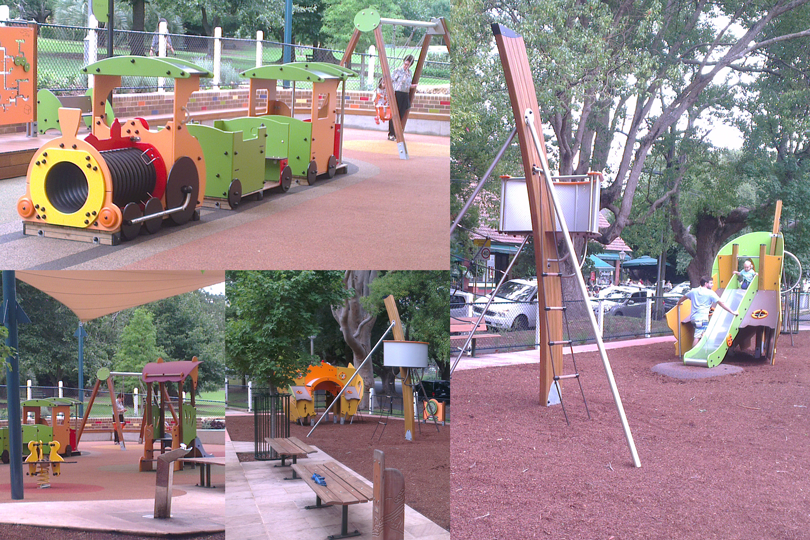 Wahroonga Park is a super pretty spot and the playground caters for kids up to about 6 or 7, maybe 8 at a stretch. Any older and they may be a little bored or prefer to kick a ball on the grass outside the playground. There’s a mini flying fox but it moves surprisingly quickly and is slightly difficult to manage – toddlers will need parental help if they insist on having a go. There’s also a large half sunken pirate ship with slide, train structure, small slide and toddler swings. But the real cracker for the toddler was the stepping bells. Poor silly parents who took the seats right next to them! Speaking of seating, they’ve done a nice job with this – there’s plenty of it to go around and a fair bit is under shade sails which is great too. And there’s a cafe across the road or a number at Wahroonga shops, so once you’re all set up with coffee in hand, you shouldn’t have to stray too far from the plentiful seating at all.

The playground is fully fenced (aside from the swings for the older kids) and sits in a bigger park which takes up the entire block. Note, the playground gates are easy to open so you do have to keep an eye on kids. It’s very pretty park, with manicured gardens and a rotunda. Who doesn’t love a rotunda?!

There are toilets and they did have a major upgrade a while back but they’re often not very clean unfortunately! 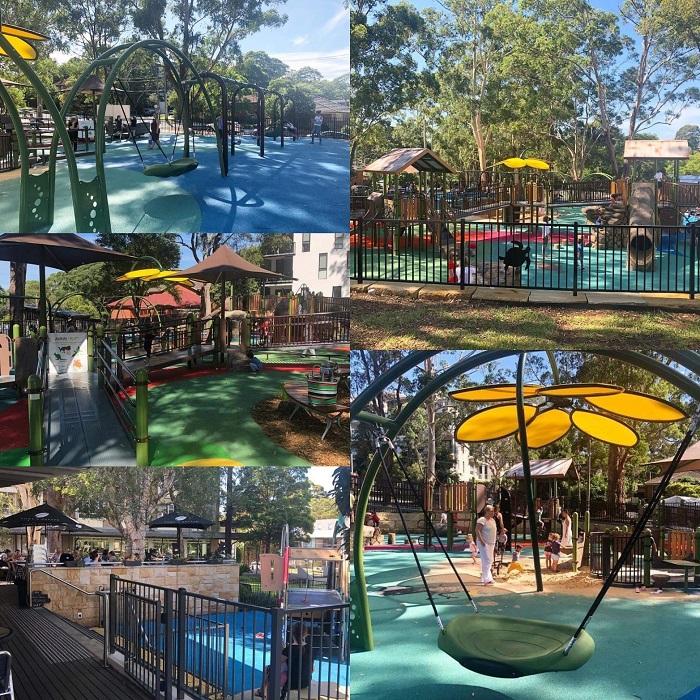 This all-inclusive playground in Lane Cove North opened just recently. The equipment is excellent, particularly for under 5s and it’s fully fenced, has toilets, is shaded by trees and shade sails, has soft rubber flooring and there’s even a little BBQ outside! We love the colours they’ve used on the equipment as it blends beautifully with the environment. We always need coffee so you can head up to Mowbray Eatery right near by which has a wonderful deck space plus a little play area for kids. 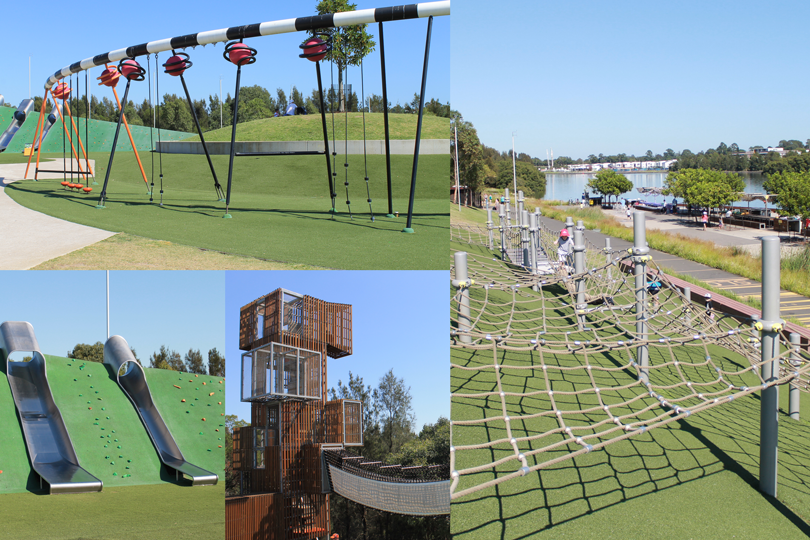 We fear our view of this park may be slightly skewed to the negative due to the excruciatingly hot day we visited that made this poor mum quite a mess. Ok, a lot skewed unfortunately but we’re going to push through it and try not to mention it too often.

We went really early so parking was nice and easy but it gets super busy as the day goes on. You can tell straight away that this playground is a little different. It’s probably better suited to slightly older kids, or if you’re there with toddlers you’ll need to watch them as you can lose sight of them behind the hills.

In addition to hills there are tunnels and scrambling walls, a large climbing net, double flying fox and an excellent swing section. There are cool slides too but beware, if it’s hot they’re not cool at all. There’s also an awesome 12 metre high climbable treehouse-style structure that overlooks the entire playground and that older kids will enjoy.

We wandered down to the riverside which was lovely as you can look at the various boats passing by. If you’re up for a coffee or refreshment, there’s the Armoury Wharf Cafe and there’s a little kiosk right next to the water play area, which is where the toilets are located as well. The one negative of the park, and unfortunately in summer it’s a big one, is that there’s just not enough shade. There are only a handful of umbrellas which obviously get snapped up quickly and there are minimal trees. The area is in desperate need of some shade sails. If you’re hard core in the heat then you’ll probably be able to hack it. But for this reason alone, next time we visit we’ll do so when it’s cooler, even if this means sacrificing the water play.

There’s heaps of other stuff to do in the area so you could easily make a day of it with bike and segway riding, walking, the BirdLife Discovery Centre, picnicking and they even have a Gallery which is open on weekends. It’s worth visiting sydneyolympicpark.com.au to help plan your day.

Not so far afield – If you’re not up for some quality car time with the small people, Fagan Park is one of our all time favourites that’s a little closer to the Hills. You can read more about it here. There’s also West Epping Park which was redeveloped reasonably recently and is awesome – again, not too far to go either. 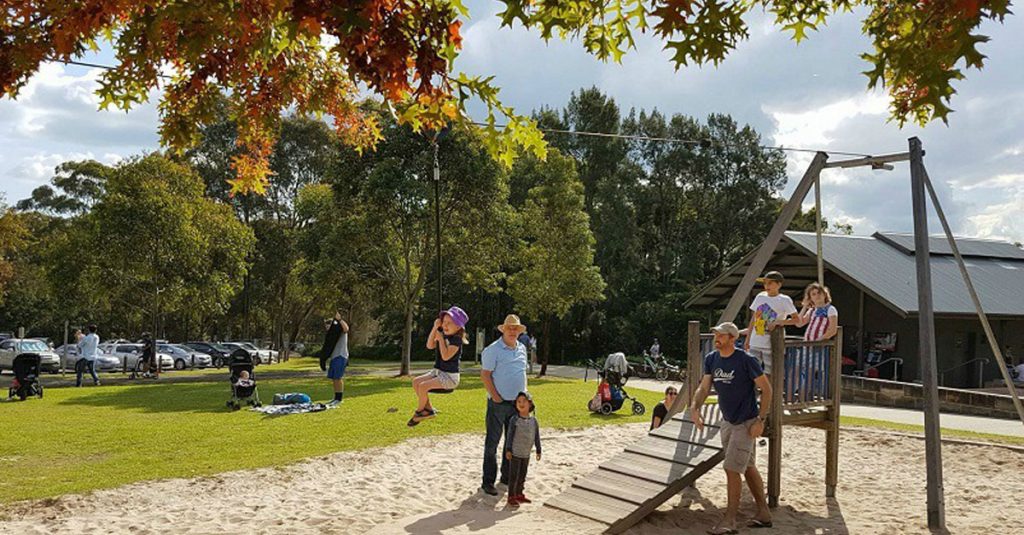 What other parks do you feel are worthy of the drive a little further afield?