8 days in as a first time school mum

I used to wonder why so many Hills District Mums said how much they couldn’t wait for the school holidays. I used to think to myself ‘Oh gosh, that’s full on. Spending 5 whole days for multiple weeks with my kid/s. Not sure I could hack that’. I haven’t done that since they were about 1! Don’t get me wrong, I love my kids. But we all benefit from having our space!

But now, having been an Official School Mum for 8 whole days, I totally get why mums say it. I am feeling stressed already and we’re only in week 3. But it’s actually week 4 I think?? Who knows. We haven’t even started weekly news yet and that sounds like a giant weekly battle to me.

I’m hoping it’s just because I’m new to this and that we’ll all find our groove. But the mornings are FULL ON! I’m not sure what on Earth I’m doing for close to 3 hours but we end up rushing like maniacs. By the time I’ve refereed the 74th fight between the 3 year old and the 5 year old, packed that darn lunchbox (more on that in a bit) and spent 15 minutes negotiating with the 5 year old about the fact that he just HAS to wear shoes to school and there’s no way around it, it’s all of a sudden 8.45am! To date I have forgotten to give the 3 year old breakfast, only realising when she told me at 9.30am that she was hungry. And one morning we were running so late I couldn’t brush my teeth before drop off. NEVER have either of these things happened before but I’m pleased to report both were rectified shortly after!

Then you have to anticipate the last minute grenades thrown at you. Last week’s included wanting to take ‘Torch’ the interactive dragon to school and carrying a tray of jelly cups for Mr 5’s birthday, which fell on his fourth ever day of school – BOOM! The stress of that exercise is a whole other topic in itself! Then coordinating the wrapping of birthday presents and contacting of books (there weren’t enough swear words to describe THAT couple of hours of pure hell) and I felt like I’d run a marathon. To say I cheated on the birthday cake front is an understatement – it’s amazing how you can tart up a Woolie’s mud cake and I love that he thought it was the greatest thing ever.

Then for an extra challenge it was raining several times at drop off or pick up – geez, that’s fun! Dropping kids in the rain is an almighty pain in the butt. These small people can’t carry anything themselves really, so you end up with all your hands full while also trying to hold an umbrella, getting drenched as they dawdle at a snail’s pace. Combine the rain with extreme heat and humidity and the mushroom-on-my-head hairstyle and sweat moustache was really not the look I was hoping for in the second week of school. Horrifying! (Someone please tell me when will I be able to just do kiss and drop!)

Now let’s return to lunchboxes – well aren’t they little rectangles of torture all dolled up with Pokemon pictures, cute little Sistema containers and brightly coloured Smash ice bricks. Smash alright – my head against a brick wall! So far we’re alternating between ham and chicken sandwiches. This in itself is a HUGE thing because my son decided to wait until the DAY BEFORE SCHOOL to eat the FIRST EVER SANDWICH of his life! You can imagine the elation I felt. So we’re both on a sandwich high and I’m going to ride this wave for as long as I can.

On the weekend I decided to get my proverbial s#it together in the hope of feeling more on top of things. And yes, many HDMs have given this advice of course, but it took me a couple of weeks to realise how desperately you need it. I now have a dedicated nook which can double as a homework desk when the time comes. There’s a bag hook and a fairly unsightly cork board (who cares though if it keeps you a little more sane) to organise all this paper that KEEPS ON COMING. I have cute thumbtacks though, so that makes me feel better. (Professional tip gained with hindsight: deal with the notes AS SOON as you get them and boomerang them right back to school – otherwise you’ll be drowning in paper, particularly in the first few weeks.) 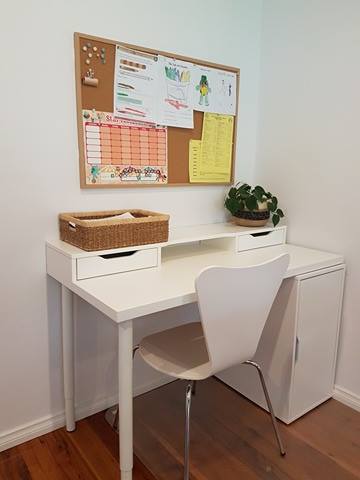 So basically we’re hanging in there and taking it day by day at the moment – I’m happy if everyone has clean clothes and something to eat for now and I’m trying not to be too hard on myself! Also, I thought my son would take to it all like a duck to water but he’s definitely finding it tough and having a few emotional wobbles. This pulls at the heart-strings big time and I have turned away after saying goodbye to him several times with tears in my eyes. I’m sure it will just take him a few weeks to settle in – that goes for all of us actually!

But the one thing I’ve learnt – and I say this without a hint of sarcasm or humour – the juggle is real. School mums and working school mums are bloody incredible to achieve what they achieve every day in those six short hours. And if you’re not sporting a mushroom hairdo then you’re REALLY winning! 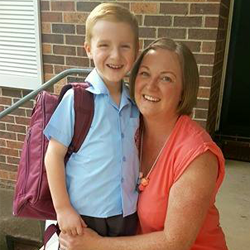